Listen in: Country Lovers is now available as an audiobook, and it’s the first Fiona Walker novel to be narrated by its author: me! With all this wild weather blowing around, there’s every excuse to slot in the air-buds or hook over the noise-cancelling earphones and lose yourself in the village of Compton Magna.

I’ve been listening to it myself, although I’ve only managed one session, played on the kitchen’s Bluetooth speaker while Sam and I prepped supper one evening. He insisted I sound great (which let’s face it, was obligatory given I had a chopping knife in my hand) whereas I think the studio may have brought in an imposter for a second take. Like many of us, I’m mortified when I hear my recorded voice because that’s not how it sounds in my head. Whereas I’d heard Joanna-Lumley-meets-Mariella-Frostrup – warmth and laughter bubbling just beneath the surface – it seems the microphone captured an altogether more excitable woman trying very hard not to flap her hands about or let her stomach rumble. (Although in fairness, I get better as I go along, and by the time Sam and I switched it off to call the girls through for supper, he was rapt, which may only in part be due to consuming a large G&T while his real-life narrator moved on from sharp knives to pans of boiling water).

One surprising upshot was that before sitting down to eat, I had to grab a notepad and scribble a list of inspired ideas to help with the sequel I’m writing, ones which I feared would be forgotten if I suffered a middle-aged data dump mid-pasta. Lots of things suddenly made sense that I’ve been getting my plots twisted over while working on the third book in the series. 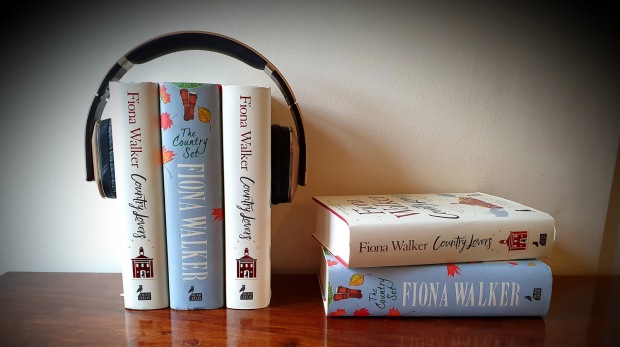 Now I plan to listen to the rest of it over half term, along with the wonderful Jilly Bond reading The Country Set, because I’m certain it will help the book I’m currently working on really take flight. Audiobooks are so immediate and, unlike the written word, we don’t linger over individual paragraphs revelling in their construction. I can get very stuck through the course of a book – not so much writer’s block as a perfectionist’s obsession with the twiddly details – and I hope this will help. Listening back to the Compton Magna novels is a way to access the village’s soundtrack that I hear in my head when writing, not the Joanna-meets-Mariella writer’s voice but all the colourful characters chattering away. Being an obsessive wordsmith, I can be guilty of over-working my sentences instead of letting plain prose do the job, but creating dialogue is different; I’ve always written that quickly and instinctively. It was only when narrating Country Lovers that I realised how swiftly it moves the story along, and only when listening back to it that I appreciated how vividly it brings a world to life. That’s why there’s going to be lots of talking in the third book (although this time I’m leaving out the Polish – and singing – in the hope that I get the narration gig again).

You can listen to a sample/buy the Country Lovers audiobook on Audible or Google Play by clicking the below (and it’s also available on CD and at iTunes):