I spent last week in a recording studio in deepest Leicestershire, shut in a small, sound-proofed booth narrating the Country Lovers audiobook. It’s an experience that has opened my eyes – and ears – to a new storytelling method. What fun! I might have written nineteen books, typed millions of words, invented umpteen characters and added more twists than sommelier at a banquet, but it’s a whole new party with a mic in front of you. Twenty minutes reading aloud to a live audience at a festival or in a library is nothing to six hours a day. I lived in that book, or perhaps more accurately re-lived, and I was so grateful to have the opportunity.

The wonderful and fast-growing world of audiobooks is one I’ve embraced whole-heartedly as a punter. I listen to lots, often switching between the page and the speaker because I physically read some sections in bed and on trains, then listen to others whilst cooking and driving. It’s revolutionised my reading habits, and I now devour double the number of books I did a year or two ago, which for a bookworm is heaven. I’m not alone; judging from the ever-expanding market, our phone’s earbuds are as often playing stories as they are music on the commute and at the gym.

The voice of the audiobook narrator is all-important, inevitably becoming so fused with that of the author that the two can be indistinguishable. Most novels are narrated by actors, and that makes total sense. I’ve had half a dozen different professional voice artists narrate my books and they’re incredibly skilful, each bringing their own unique energy and drama to the tale, and in my case a cornucopia of accents, some lusty panting and the odd whinny. While some have played more for laughs and others for pathos, there’s a terrific joie de vivre to them all, and I’m incredibly grateful for the way they have brought my stories and characters to life over the years.

Nevertheless, when the suggestion that I could narrate my own audiobooks came up at a recent publisher meeting, I jumped at the idea. There’s nobody closer to the story than the originator, we agreed, and as I’d dabbled with a drama training in my ancient history and love doing readings, it seemed a wonderful way to add something new. Not that I could get the job without an audition, so I sent a test demo to the studio, recorded in the plotting shed with background chair creaks and dog yawns. I passed the grade, only later realising that it would involve a week away from home, five days’ recording and a lot of lozenge sucking.

On the studio’s advice, I marked up the book with different coloured highlighters for each character’s voice (note to self: write fewer characters) flagged up descriptive words like ‘whispered’ ‘shouted’ ‘groaned’ (note to self: limit gravelly voices, throat clearing, uncontrollable sobbing and lusty undertones) and ran through some of the trickier passages beforehand (nts: absolutely no more drunken Irish folksongs, Polish sex slang and long alliterative descriptions of fecund foxes flirting, fornicating and fighting amid frost-freckled foliage). On the Monday morning of my recording week, I met producer Chris, a head-phoned maestro of the sound-mixer who cued me in and I was off – straight into a bit of furtive vodka-swilling and foreplay in an equestrian team’s staff flat in the Middle East. Chris then patiently endured a week of my many fluffs, stomach rumbles, sarcastic grumbling about the author and one very dodgy attempt at singing Charles Aznavour (which given that every tiny sound in that booth is amplified, takes truly saintly patience). Before I knew it, I was saying ‘the End’, feeling bereft. 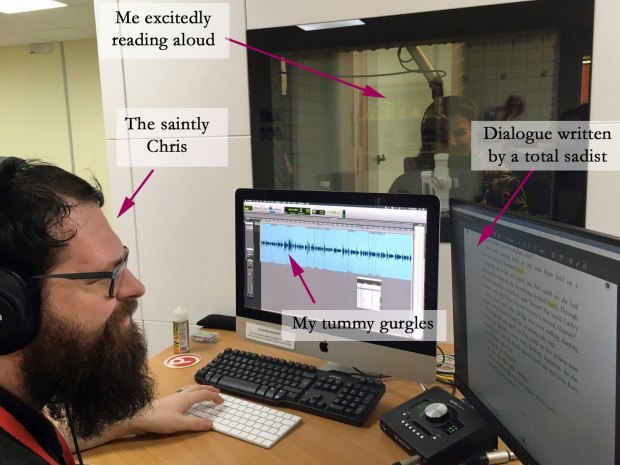 I absolutely loved reading out Country Lovers, an experience that has taught me how tough a gig narration is, but also how rewarding. It takes far more concentration than I’d anticipated to keep the storyline rolling along, the characters consistent and the energy up. Some authors are total sadists when it comes to their cast, and I’ve realised I’m one of them. In Country Lovers the dialogue is a globe-trotting tongue twister: there are Swedish, Polish, Australian, Canadian, Dutch and Arab voices; closer to home, they come from Wilts, Yorks, Glos and Brum. One of the central characters, Bridge, is from Belfast whereas another, Luca is from County Kildare, and switching between them was hell as I muttered “Hiy niy brine coiy” one minute, and ‘dat’s a grand-lookin’ herse dere’ the next. I can only apologise unreservedly to all Irish readers if I wandered off course. Rather alarmingly, I found that my default voice was the Queen, which I put down to streaming The Crown in my hotel room. But I enjoyed every minute of recording it. It brought my big book to life again, all in one place and in all its finished finery, which, after a year or more writing and rewriting, reading and re-reading, was a great privilege to be part of.

I really hope more fiction writers start to record their own novels as audiobooks. It’s not only a unique way to add authenticity and meaning for listeners, but it crowns the writing process with storytelling again rather than packaging. Lovely as it is to see one’s finished book in the shops when it’s published, the last time most writers will have read it all the way though is at final printed proof stage, a forensic search for misspelling and typos; before that, we’ll have re-read it multiple times whilst editing, so we’re usually quite grateful to wave it through to production with red margin marks flagging up extraneous commas. Which means our enduring memory of any given book is often the small black and white mistakes, not the big story. That is unless we get the chance to read it all aloud afterwards and remember why we love sharing our stories so much…

The audio version of Country Lovers will be available early in the New Year.