As a child, whenever I was upset (which being a sensitive clutz, was often), my mother would say ‘I wish I had a magic wand I could wave to make it all better.’ And I used to wonder why she didn’t have one. Who was in charge of handing out the wands? They weren’t doing their job properly. Mum deserved one, and one day I vowed I would find where they came from and acquire one for her. 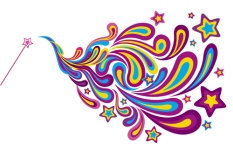 Even after I flew the nest, she’d repeat the phrase whenever I cried on her shoulder about relationships breaking up, then later when I confessed that my marriage was ending, when we were all left devastated by the death of my darling dad, when the career I was so proud of started faltering, when Sam and I were forced to sell the farm we loved so much, and then on the fateful day she confided the heart-breaking news that she was terminally ill: ‘I wish I had a magic wand I could wave and make it all better.’

When Mum died last year, she passed the wand wish into my care. I’ve never wanted its magical healing as badly as I do now that the world feels very small and frightened.

In such an extraordinary time of restriction and separation, it’s not easy to know where to turn in our imaginations. In between obsessively checking live news feeds, I’ve been staring at this screen for far too long each day agonising over what I’m trying to achieve and why it matters. Suddenly, my sociable, fictional world that felt so real just a month ago is the alien one compared to the dystopian reality. I want to shout at my characters to stop all this non-essential cavorting, canoodling and carousing and go straight home to make bread and watch old Miranda repeats. Then lie awake at 3am trying to come to terms with it all.

Rediscovering old, favourite novels is a huge comfort, and I’m enormously grateful for the messages that I’ve received in the past fortnight from readers who are rereading mine: French Relations, Kiss Chase, Well Groomed and Snap Happy are getting lots of mentions in particular. Oh, how I loved writing in the 1990s, those heady days of freedom before cartoon covers and pink glitter were stamped on every commercial novel written by a woman under fifty.

With that in mind, I thought I’d use this blog to make some of my own 90s retro reading recommendations. These are pure comfort reads, not those books I left casually lying around my single girl flat to try to look streetwise and/or intellectual (And The Ass Saw the Angel on the coffee table, Skinny Legs and All by the bed, Possession by the bath and Martin Amis draped pretentiously everywhere). The books listed below were (almost) all bestsellers and as such will be familiar to many, which I think makes revisiting them particularly apt at a time of such enforced separation.

The book that made me want to be a writer:

I love Angela Carter’s work with a passion, and this wonderful tale of an outrageous theatrical family was my solace when I graduated from university uncertain what to do for a living now I knew acting wasn’t likely to be my metier. Every page is a lesson in glorious, joyful, characterful writing. I’ve read it multiple times since.

The book that could have stopped me:

The Old-Girl Network by Catherine Alliott

The year before this came out, I’d searched far and wide for fictional fun that tickled my twenty-something fancy, eventually giving up and starting to write it myself. I was putting the finishing touches to French Relations when I read The Old-Girl Network. It was fresh, funny, youthful and everything I’d been looking for. Had I found it sooner (ditto Marian Keyes’ Watermelon which came out soon afterwards), I might never have written a word.

The book everyone told me to read:

The Beach by Alex Garland

I read this ‘authentically’ while visiting my best friend who was working in Thailand at the time, and with whom I went island hopping. I felt I was living it – although mercifully not the grislier bits – and it remains inexorably linked to that trip. (In the same way, I read Captain Corelli’s Mandolin on holiday in Kefalonia, but I was there with my ex-husband and hated the way it ended on both fronts, so it’s not made my list…)

The book I can read over and over again:

The fairy godmother of romps has to be here, and this is in my top three (Riders and Rivals being 80s will have to be on another list, as will sneaking Emily off Mum’s bookshelf in the 70s and getting into trouble at primary school for proudly presenting it as my current read). Polo fizzes with outrageous wealth, snobbery, misogyny, glossy ponies and lashings of old-fashioned good vs evil. It’s simply glorious.

The book I pretended not to read:

It was considered deeply uncool among my arty crowd to want to follow the day to day épicerie and degustation of middle-aged ex-pats in the South of France, but I rebelliously read this sequel to A Year in Provence in one overnight binge and then started again from the beginning. Peter Mayle was wry and funny and turned me into a lifelong Francophile.

The book that made me cry:

The Horse Whisperer by Nicholas Evans

I read this on a long haul flight and cried so much that the passenger beside me pressed the buzzer for the stewardess thinking I was having a fit (I’m not a pretty crier, but honestly). Many books reduce me to tears, but seldom so publicly or inconsolably. If you’ve only seen the film, I urge you to read the novel because the ending’s better (in my opinion).

The book that made me laugh out loud:

The Queen and I

Having grown up on a diet of Sue Townsend’s Adrian Mole, I knew this revolutionary tale about the Royals going to live on a council estate would make me titter, but what I hadn’t expected was for it to be so affectionate and wise, or that the titters would become so uproarious. It remains a total cheerer-upper of a book.

The book I wish I’d written:

Behind the Scene at the Museum by Kate Atkinson.

I’ve owned more copies of this novel than almost any other because I keep giving it to people to read. (A copy went to my brother-in-law just last month). There’s something about Kate Atkinson’s storytelling that absolutely captivates me, and her skill with character and time is breath-taking. To incorporate six generations of women and a great swathe of history in less than 400 pages with apparently effortless ease is nothing short of brilliant.

Tonight’s pink ‘super’ moon might not be quite as magical as the wand my mother always wished for, but I think it’s worth heading out into the garden to look up at it and remember how extraordinary life is, how precious, and how much we all deserve to live it to the full. And thank goodness for books.

As my wonderful godmother signed off in a recent message to me (explaining that she’s a bit fed up with everybody saying ‘stay safe’):

8 thoughts on “A Wish, a Reading List and a Pink Supermoon.”